Posted on February 1, 2011 by thebenefitblog

It remains to be seen what impact this will have on the enactment of President Barak Obama’s healthcare reform. For now, we can be certain reform will be caught up in the court system for some time. In the future, we may see Congress repeal the healthcare bill. This issue is on the forefront of any benefits provider, particularly the small to mid-size business owner who faces extreme challenges in affording healthcare mandates. I will keep you posted on the evolution of this bill and what the changes may mean for your business. – Eric 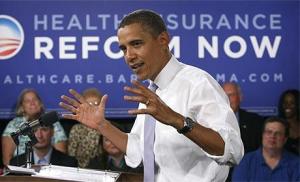 U.S. District Judge Roger Vinson in Pensacola said yesterday that a provision of the law requiring Americans over 18 to obtain insurance coverage exceeded the power of Congress to regulate commerce under the U.S Constitution. Because the insurance mandate is central to the legislation, the entire law must be voided, he said. The U.S. said it may seek to block the decision while it appeals.

Florida sued on behalf of 13 states on March 23, the day Obama signed into law the Patient Protection and Affordable Care Act, legislation intended to provide the U.S. with almost universal health-care coverage. Twenty-five states had joined Florida’s suit by yesterday’s decision. Virginia sued separately on March 23 and Oklahoma filed its own suit on Jan. 21.

“We are analyzing this opinion to determine what steps, if any — including seeking a stay — are necessary while the appeal is pending to continue our progress toward ensuring that Americans do not lose out on the important protections this law provides,” Tracy Schmaler, a spokeswoman for the U.S. Justice Department, said in a statement yesterday.

The 955-page law also bars insurers from denying coverage to people who are sick and from imposing lifetime limits on costs. It includes pilot projects to test ideas like incentives for better results and bundled payments to medical teams for patient care.

Stephen Presser, a professor of legal history at Northwestern University in Chicago, called Vinson’s decision “powerful” because it was the first finding that the mandate to purchase insurance can’t be separated from the rest of the law and saying it must be thrown out in its entirety. He called the judge’s analysis “absolutely right.”

Still, he said, “its utterly unclear at this point what long-range effect it will have,” because the ruling is enforceable only in the territory governed by the federal courts of Florida’s northern district, encompassing Pensacola, Gainesville and the state’s capital, Tallahassee.

Presser, who has testified before Congress about constitutional law, said the administration would probably ask the U.S. Court of Appeals in Atlanta to halt the enforcement of Vinson’s decision pending an appeal.

Three other courts have weighed in on the law, two of them upholding it. In the third case, U.S. District Judge Henry Hudson in Richmond, Virginia, voided the mandatory-coverage component, while allowing the rest of the law to stand. An appeal of that ruling and of a decision upholding the law are slated to go before a Richmond federal appeals court in May.

While appeals are pending, nothing stops the U.S. from enforcing the health-care legislation outside of those districts where part or all of it has been invalidated, Presser said.

“Politically, it may have much more staying power,” said Carl Tobias, a law professor at the University of Richmond in Virginia. “It does reinforce the opponents of the legislation in the political sphere.”

The ruling by Vinson, who was named to the federal bench in 1983 by President Ronald Reagan, a Republican, would go before the U.S. Court of Appeals in Atlanta. The U.S. Supreme Court may ultimately be asked to consider the issue.

“The judge has confirmed what many of us knew from the start: Obamacare is an unprecedented and unconstitutional infringement on the liberty of the American people,” Florida Governor Rick Scott, a Republican, said in a statement.

The individual mandate combined with expansion of Medicaid and employer-based coverage would extend health coverage to 32 million more people by 2019, according to the Congressional Budget Office. Mandatory coverage, which the U.S. has called the linchpin of the plan, would start in 2014.

“All insurers will continue on the path they are on, complying with the health law and the mandates until the Supreme Court rules,” said Ana Gupte, an analyst at Sanford C. Bernstein & Co. in New York, noting that the law “is still the law.”

Hudson, ruling in Virginia’s case on Dec. 13, also held the mandate unconstitutional. The government lacks the authority to “compel an individual to involuntarily enter the stream of commerce by purchasing a commodity in the private market,” wrote Hudson, who was named to the bench by Republican President George W. Bush. The judge said the rest of the act could stand.

Two federal judges have upheld the measure. U.S. District Judge George Caram Steeh in Detroit, found in the administration’s favor in a lawsuit brought by the Ann Arbor, Michigan-based Thomas More Law Center. U.S. District Judge Norman Moon in Lynchburg, Virginia, issued a similar decision in a case filed by Liberty University. Steeh and Moon were both appointed by Bill Clinton, a Democrat.

To contact the reporter on this story: Andrew M. Harris in Chicago at aharris16@bloomberg.net.

To contact the editor responsible for this story: David E. Rovella at drovella@bloomberg.net.

Eric is a Producer at Lockton Insurance Brokers, Inc., the world’s largest privately held commercial broker. Eric has over 23 years of experience in the insurance industry and has spent the last 11 years with Lockton. Eric specializes in Health & Welfare Benefits, Retirement Planning, and Executive Benefits. Eric's clients utilize his expertise in the areas of Plan Due Diligence, Transaction Structure, Fiduciary Oversight, Investment Design, Compliance and Vendor negotiation to improve the operational & financial outcome for each client. The Benefit Blog is a place to share that expertise and industry news.
View all posts by thebenefitblog →
This entry was posted in Health & Welfare. Bookmark the permalink.